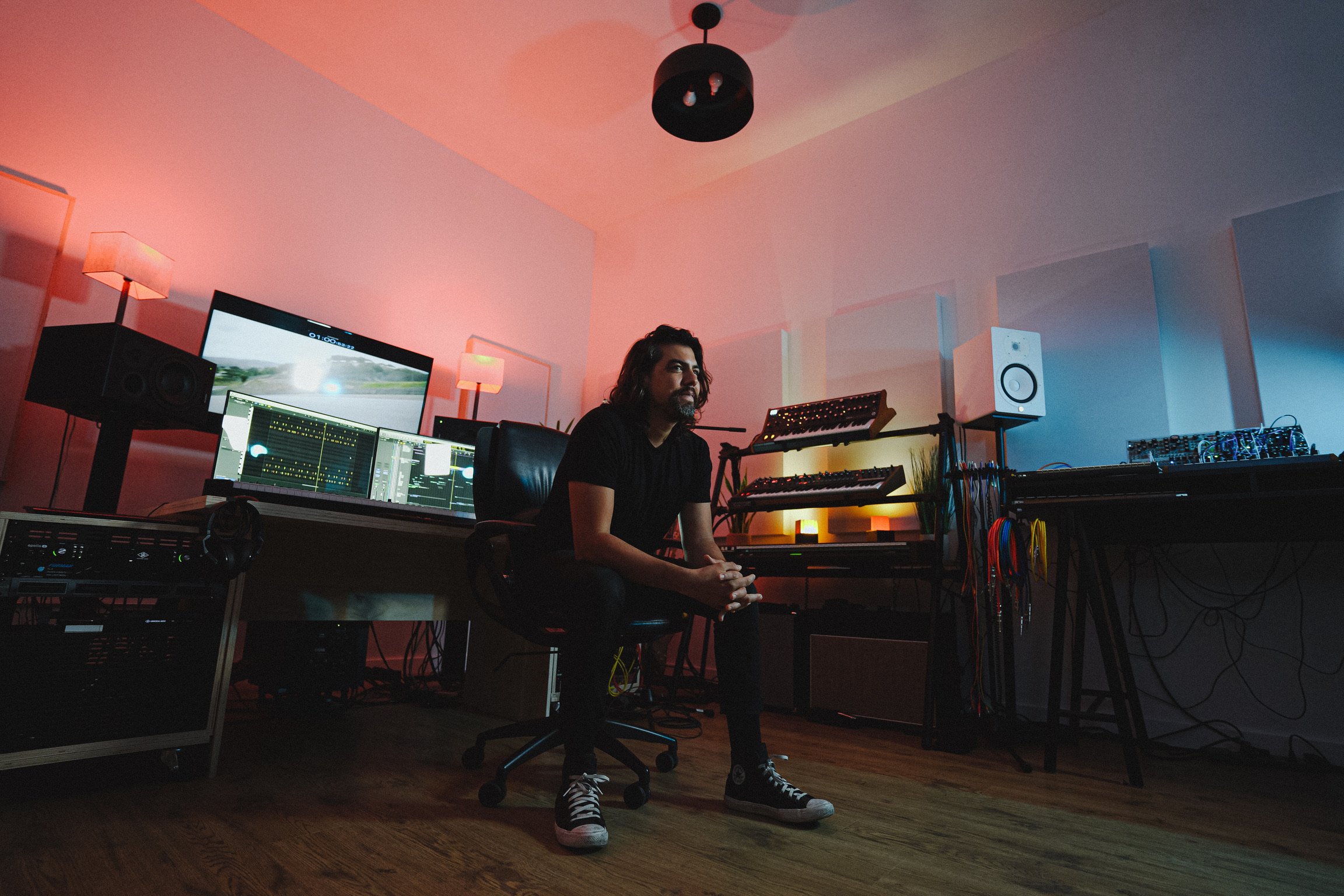 Here’s a LINK to listen to the latest episode of our podcast series: OPT IN, bringing you honest, insightful conversations to help you not only survive but thrive in the film industry today. In this episode, I sit down with film composer Julian Cisneros.

Everyone knows music is the heart of every film. Subtle tones and scores create an emotional journey for the audience and the music often tells its own story throughout the film. At the heart of a lot of Origin Point’s films is Julian Cisneros.

Julian is a film composer and multi-instrumentalist most known for taking the traditional orchestra and unifying its versatility with arrays of analog, synthesis, and organic texture. The result is a continuously evolving sound that integrates with his various projects.

So, tell us, Julian, what is it that you do exactly? What does a composer do?

[Julian]  Well, essentially, you are creating music, custom music to complement a film. When you’re watching a movie, watching a TV show, you’re hearing those dark, ominous tones. You’re holding the keys to the heart almost, in a way. As someone’s listening to dialogue or as they’re watching incredible cinematography, the music is in the background telling you how to feel, and what to feel, and when to feel it.

Did you always know that you wanted to score the picture and be a film composer? How did you get started in this business?

[Julian] I wrote this thing that was like an orchestral suite kind of thing on the piano. That was when I started telling people that I wanted to write music for film because I thought it sounded like a film score. But where I grew up, nobody did that, and it wasn’t a career option, and I knew nobody in the film industry, so it was impossible to talk to someone about it, really. It was just like, it didn’t seem like a real thing, but somehow I thought this is something I really want to do. I knew I was going to leave town. I just had that feeling. And so when I graduated high school, I didn’t know exactly where I was going, but three months later, I was living in England and I was playing in bands. So I wanted to be like that rock star. I shifted to being in bands and do that whole thing.

But then the film scoring really kicked in. It would have been 2008, someone asked me to write music for these infomercial bumpers, these little 30-second intro things. There’s a Christmas one, there is this thriller one, and there is this rock and roll one. I just was so stoked to actually have a picture and that’s the first time that I wrote anything to film. It was cool because I got to write all three different genres and get creative that way. Then from that, I started getting suggested to people, like, “Oh, there’s this guy in town that does stuff.” And there happened to be an animation company that made iPad interactive storybooks for kids and that was the first time I started making money. So I got introduced to these people and then I wrote pirate music. I wrote surf rock. There’s this one storybook with this little alien that teaches you how to breed.

[Julian]  I would say, technically, I didn’t go full-time until 2017. The animation thing was making some money for a while then it dried up, got married, right when it all dried up, right after it all dried up. So I went back to waiting tables for a little bit, but still doing music as much as I could. During that time, we moved to LA. So 2012, I’m living in LA now. So that put me in a whole new circle of people. I just had to start from scratch really at that point because no one knew who I was, no one cared. That really, looking back, started a five-year process of just paying my dues. Even the first Collective’s, I think Asgeir’s budget was $350 just to license something. So I was like, “I’ll do it for 350,” and I think I spent $500 worth of gear and stuff just to make it happen. That really started that whole investment.

2013, I met a guy named Sam Estes, who was the main sound designer for Hans Zimmer. He created the inception brom sound that has since taken over every single trailer ever since. He created that sound. He was a sound designer. He took me under his wing and taught me how to do sound design, how to make contact instruments. So, luckily for me, I started working, as you remember, you came to the studio, I believe, for a company called Big Fish Audio. They hired me to make them virtual instruments, which is, for those who don’t know, the tools that composers use to write all the music. Someone is making a drum sound, it’s actually recorded and then arranged and programmed in a way to where a composer could use his keyboard and trigger drum sounds. So that’s basically what I did and that paid the bills. I worked nine to five doing that, in the same vein of what I wanted to do. But then after five o’clock was when I’d start my composing job because I’m still making $350 a project and projects are maybe seven a year or something like that. So it’s not like by any means you could support anyone or even yourself.

So, I really had to build that on the side and it took me all those years to 2017, to the point where I was getting paid well per project, well enough, and I was getting enough work to where I started making more than my salary making virtual instruments. So it was a nice year because I was making really good money. But then I knew I had to, at that point, make the jump. I have to either quit my day job now or I don’t know if I can. Now we had two kids. And so our second son was born, we bought a house, and I quit my job.

For somebody who is interested in pursuing a career in music, how do you make a living making music? Where is the best place to start?

[Julian] Every journey is different. There’s so many factors dependent on if you can keep moving forward through the hard years, through the ups and downs. To get started, you just have to be able to actually do the job. If you wanted to get into film composing, it’s like, can you actually write music that’s compelling? Can you actually write music that matches a vast amount of situations, and emotions, and genres? Can you be innovative to create something unique that actually has your own sound? I don’t think that comes right away. I feel like I’m barely figuring out myself in my sound.

The number one thing that I do tell people who ask me is I’m like, “You just have to write.” Write, write, write. A lot of people have these dreams, but they never write anything. They’re not sitting there actually accomplishing music on a day to day basis. It’s like they live in their mind, this is what I want to do and so I can talk about it or I can just make sounds, make noises. But you have to be able to create something and, not only that, work with people’s deadlines. It’s just so it’s not an easy job, it’s so hard because film composing is like inventing something. You’re inventing sound that’s never been there before. And as the projects get more and more, I don’t know, intense, and serious, and with more people involved, they look better, they’re cooler, but there’s so much more pressure on you. The music can’t suck.

So the best way to get into it is to write. Just keep writing. And if you write good music, and you’re a good person, and you’re able to collaborate with people, start working with local filmmakers and just create stuff, even if it’s not good. Just finish projects. You have to write 99 bad things till you get to that really good one. You have to make some bad films till you get some good ones. I can’t even watch my old work. I can’t. I can’t listen to it. I think it was so good at the time, thought it was so good at the time. That’s proof that you’re growing.

How do you stay innovative in this space as an artist, as a musician?

[Julian] I think back to this project I did for a company called Black Diamond. They like a North Face or Patagonia. They’re like outdoor stuff. Outdoor apparel, yeah. This whole ad was basically there’s this couple hiking through the forest. It’s all vibey and cool. But the score is, man, I can’t think of anything that’s happening that really is complementing this. Then I was like, “They’re just walking through the forest. What if I just use things that I see on the screen?” So then I went outside, I broke some branches, got some rocks and I started just recording to a specific tempo. And then I started chopping those sounds up and ended up making this music for this ad that when production heard it, they’re like, “What the heck, this is amazing. This is so cool.” To me, personally, as a musician, I was like, “This is awesome. I can’t believe I made that.” And this was so much fun.

I think I learned a big lesson there about being innovative. You do have to think outside the box. You do have to go see what’s around you. You look at what the environment these people are in and can you create something musical with what people are looking at? Because people are subconsciously connecting the sounds to what they’re hearing or what they’re watching and so, if you’re able to actually connect the dots, I feel like you’re actually being innovative. So from that point on, I always try to record as much as I can, create something fresh and new. It’s tempting sometimes to go use presets in the box. Sometimes you got to because you got no time and you got a deadline. But for the most part, my way of being innovative is just recording found sound. Think of something that no one would ever consider. Keep your ears open for sounds around you and use your iPhone voice memos as much as possible because you can record and create some cool stuff.

Can you share some of your personal tips and advice for future composers who want to get in the industry and maybe take that leap into creating their own original work or projects?

[Julian] The biggest thing is his community. Find yourself a community for filmmakers and try your best to bring your best to the table. Stay in the game. Master your craft. Write, write, write, write. And if you’re working with people and you’re creating films, you’re scoring films, short films with your local community, it can grow from there. It’s funny, talking with you is like the missing piece. You also need that community.

Listen to the full conversation in our podcast, OPT IN here.

As promised, here’s the Christmas spot we worked

Never too late or too early for a little holiday j

Thrilled to be working with the incredible team at 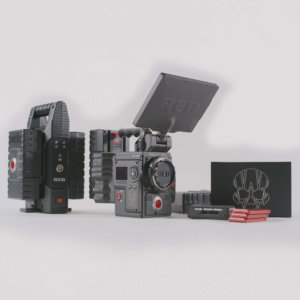